Steps of the Teen Slasher Franchise 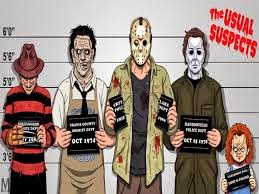 There is no sub-genre that fits the same structure as often as the teen slasher.  The conventions were established early on and are followed with very few modifications. The audience expects a young, often teens, group of sexually-attractive characters stalked and killed by a knife-wielding psychopath, usually in a brutal and shocking manner.  These killers usually appear to be immortal and unstoppable.  This is the expectation and will always be successful layout for the fans of the teen slasher.  The only way to fail as a filmmaker is to attempt to change these conventions.  The ideas presented above are nothing new.  Every movie fan understands that the teen slasher follows the same conventions.  A more fascinating comparison is the consistent approach that is taken to make a successful film franchise.  Just like the successful teen slasher film follows the same structure as all others within the subgenre, the most successful teen slasher franchises appear to do the exact same.  After the success of the original film it is obvious to everyone the need to make a few sequels.  Once the sequels run their course, a “final chapter” is made; however, this “final chapter” never ends the series.  After a few years pass, there is an attempted franchise rejuvenation.  And finally over the past decade, most teen slasher franchises have completed their cycles with reboots that combine the franchise’s initial concepts and the current expectations, or sometimes perceived expectations, of slasher movie fan.  Over the next week I plan on detailing these steps.

Here are the links to each step as well as some background information:
The Origins of the Teen Slasher

The formulaic nature of the teen slasher is well-known and well-detailed.  Mostly, the fact the sub-genre sticks to its conventions so strongly is applauded by the fans of the genre.  A less discussed idea is the formulaic nature of these franchises as a whole.  There may be minor differences but most successful horror franchises follow the same steps, from the original to the initial sequels to the “final chapter” and throughout rejuvenation attempts.  Finally the cycle is finished with either a reboot or remake of the franchises original film.  I discussed three example extensively, but this formula is followed by many others.  The Leprechaun (1993) franchise has an initial “trilogy” that appears to complete the series.  Recently the series has been rebooted with the release of Leprechaun Origins (2014).  The step can also be seen within the Childs Play franchise.  An initial trilogy, followed by a rejuvenation in the form of Bride of Chucky (1998) and Seed of Chucky (2004).  And the series received a reboot last year with Curse of Chucky (2013).  These trends show that formulaic nature of the slasher does not stop with the individual films.  All of the franchise also have a formula that they follow between their films.